IT'S CHEAP, AND IT WORKS FANTASTIC! 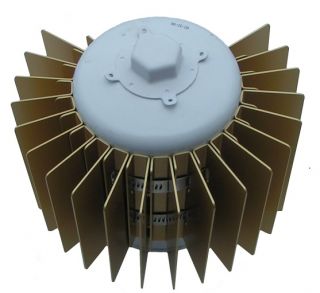 These fins total a whopping 300 sq/in of cooling area to suck the heat from your oil filter, thereby cooling your engine oil. The fins are gold anodized and quickly secured to the oil filter with two hose clamps. Easy on..easy off. Everything you need is in the kit. Lower your oil temperatures today with our "Poor Mans" oil cooler.

History Behind The Development Of The Airwolf Oil Chiller
Or
The Method To My Madness, Depending On How You Look At Things

I belong to a local soaring society. One day I happened to be talking to a couple of the tow pilots. Given my curious nature, I asked them what the oil temps were on the Scout. They said on a 5,000 foot tow, the temps were right at 250F. I said, "Say what?" They said, “You heard us correctly, the Oil Temps are 250F.” I said, "are you guys crazy, you can't let temps get that hot, you are going to cook the engine.” I said, “guys, I will pass on a saying an old timer at Lycoming once told me which is at 265F you have two minutes to live.” The oil temp you read on your instrument panel is actually 50 F lower than what the oil is in the sump. (265 plus 50 = 315) At 315F there is no lubricity left in the oil and engine failure will occur. I told them the first thing they need to do was calibrate the engine temp sensor to see what the engine was really operating at. They calibrated it and found it to be accurate, and the engine was truly running at 250F.

What bothered me the most is that these guys thought nothing of running the temps this hot because they were "still in the green". Granted common sense says that you want to be in the bottom of the green, not at the top of the green which sits right next to red line on the gage. Given that fact that one of the tow pilots is a 737 driver, I was baffled that there was such a lack of concern about high oil temps, [Yeah, I will probably catch hell when he reads this, but it is, what it is.]

There is an internal joke within the soaring society that tow plane pilots are out to kill glider pilots. As much as I hate to say it, there may be some truth to this thought process as again I am baffled as to why there was such a lack of concern about critically high oil temps.

I informed all the members of the soaring club that if I they wanted to keep me as a member, we had to address these high oil temps. I told them that they were going to have to spend some dollars with Airwolf, but that I thought we could really help them. To my relief they agreed with my logic below.

The following is the plan of attack I developed for the club.

With the four changes listed above in place, the oil temps on the Scout dropped from 250F to 200F. They experienced a true 50F drop in oil temps. I never imagined our oil chiller would ever drop the temps this much. I would have been happy with 10 degrees. They also changed the speed that they tow the heavier gliders at from 65 kts to 75kts. This reduced the temperature another 15 degrees with the end result being an engine temperature of 185F. This is exactly the temperature Lycoming wants their engines to operate at. Life is good.

The story above illustrates how well the Airwolf Chiller works. Our oil chiller is a great heat sink, just like you would see on a computer CPU. Heat sinks maximize surface area for cooling, but they are dependent on air flow. The greater the airflow...the greater the results. If you are considering putting our chiller onto an oil filter which is bolted directly to the engine, you have to remember you have a massive heat generator called and aircraft engine. The engine radiates a lot of heat. The further you can get the filter with the chiller attached away from this heat source, the better your results will be.

Here is how I suggest you try it out on your aircraft.

Bottom line is our oil chiller really works. If it can drop temps 50F on a 180 hp American Champion Scout towing a heavy glider with three passengers up to 5,000', imagine what it could do for you.

There are no guaranties in life, and we do not guarantee how much it will drop your temps. We made our chiller so reasonable in price that you have little to risk, and much to gain. We want to hear all the feedback that we can, so please let us know how well it works on your aircraft.